Ropati Hebenstreit was born on Oahu in 1957 to Carl Hebenstreit, a TV personality aka  ‘Kini Popo’ and mother, Johnny Frisbie who was born In Tahiti and is the first Polynesian women to write a book, Miss Ulysses from Puka-Puka. Hebenstreit’s grandfather, Robert Dean Frisbie wrote My Tahiti. Print seems to run in the family. 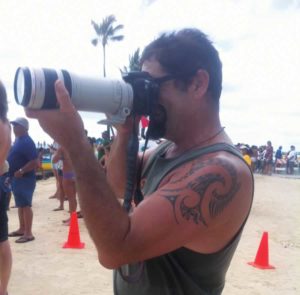 In the early 60’s the family moved from Hawaii to the Cook Islands before settling down in New Zealand. In 1980 Hebenstreit returned to Hawaii looking for warmer waters to surf. He worked at Trade Publishing Company starting out as a delivery driver, then editor and finally into magazine production. His work won several Pa’i Awards for design and layout. In 1987 Hebenstreit decided to further his education by going back to school to earn a Bachelors Degree. He graduated from the UH in 1994. In 1995, Hebenstreit was introduced to outrigger canoe racing and was soon hooked on the sport. He liked being part of a club, the potlucks after a race and the many friends he made. That’s were he met his wife, Amy.

One thing was obvious to Hebenstreit the day after a canoe race, there was little enthusiasm for Hawaii’s Team Sport in the media. All paddlers got were race results and once in a while a story on Molokai Hoe or Na Wahine O Ke Kai. A friend of Hebenstreit’s, Ron Cotteen, put the bug in his ear that the sport needed it’s own magazine, for paddlers by paddlers. Fresh out of university, proficient in desktop publishing and still keeping’s his day job at ‘Trade’ Hebenstreit and Cotteen worked on putting the first few issues together. In April 1996 the first magazine dedicated to outrigger canoe racing, Pacific Paddler, was released and handed out for free at the races. The magazine soon became highly anticipated. When Hebenstreit pulled his cart of magazines through the regatta paddlers would stream out from under tents to get their own copy. They enjoyed their own publication and would pour through it’s pages to find paddlers they knew or perhaps themselves.

Recently Hebenstreit was made the Grand Marshall at the Catalina Channel Crossing for his work in promoting the sport. He has also been recognized for helping spread the sport of outrigger racing outside of Hawaii with the magazine as a way to show potential sponsors how popular paddling outriggers is.

Hebenstreit has 21-years dedication to promoting the paddling lifestyle and the Polynesian cultural heritage that goes with it. “My main goal is to get business to step up to the plate and support our clubs and associations who are putting on these races and teaching our youth how to paddle.” Hebenstreit thinks paddling has a lot to offer young and old alike and is always on the lookout for the potential paddlers of tomorrow.

Ropati Hebenstreit lives in Punaluu on the Windward side of Oahu, Hawaii.