The last thing anyone wants to see while testing the 1st crew rig is a close-out wave behind them. Two days before the Molokai Hoe, and we thought our canoe was ‘toast’.

I drove my 19’ Boston Whaler over from Oahu earlier that morning. The large Northwest swell was wrapping around Laau Point and pushing hard all the way down the coast.  We watched the salvage operation of EDT’s canoe in progress just South of the harbor as we made our way to Lono.  Apparently they got caught in the surf.  The hull was okay but the rig was destroyed.

We moored just inside the harbor entrance and monitored the wave action while waiting for the rigging crew to show up.  No close out sets. So when it came time to test our ama trim, I was confidant of where we needed to be to stay safe, in mid-channel.

Since the weather had been so calm the past few months, I felt the need to try the rig with weather on our ama to make sure our steersman would be comfortable. As we were paddling out the channel, we found we needed to modify the blocking. The ama was riding too light so we started to turn around, careful to stay mid-channel. Meanwhile, we’re watching one California crew a little outside of us edging dangerously deep into the upwind side of the channel just as a set was looming on the horizon. It was looking like they were trying to catch an in between set wave. I’m thinking, ‘These guys have no idea how much trouble they are in.’

Seconds later, a set wave wrapping in to the downwind/Laau side of the channel swings wide and starts to feather mid channel just outside of us. We’re over half way thru our turn, pointing toward Kaunakakai so our only choice was to run for an upwind shoulder — I was paying too much attention to the ama and not enough to the ocean. Now we’re in trouble too. Hold water. We do not want to catch this wave!

We’ve been forced into the Kaunakakai edge of the channel near the California guys.  They’re not laughing any more. The next wave is even bigger with the peak forming up directly behind us.  Things are happening fast now and we’re out of options. The only thing we can do is square up on it and put as much distance between us and that pitching lip as possible.  The boys instinctively paddle forward fast then bail out at the last second.  Since it was my bad judgement that got us into this predicament, I opt to stay with the canoe. Keeping the canoe straight as long as possible and having someone near her when the wave is spent will maximize the chances that the rig will survive intact… unless that one wave takes it all the way in and smashes it on the jetty. Thunder of exploding wave, brace, slam into seat five, lose paddle, ball up, canoe starts to huli, suck down into hull, grabbed by static water, slam back into 6 seat, canoe starts to slow and right itself, spent wave passes under swamped canoe, can see again. Rig miraculously intact, body intact, count heads. There are five directly behind me spread over 300 yards, no one appears to be in distress. The California canoe rig appears broken, fortunately all six-heads are up but there are definite signs of distress.

In less than 30 seconds, they went from laughing and playing to coughing up foam and waving their paddles while calling for help. Thankfully, Wayne German and some others watching from inside the harbor were already on their way out for the second rescue and salvage operation of the day.

I pop the ama to drain some water out and collect up paddles and paddlers, and we paddle like hell over to the channel mouth with one eye on the next set coming in. I climb aboard the Whaler to help with the salvage.

So how did both the veteran and rookie end up in the same trouble? Not giving the ocean the respect she commands:  always be aware, never under estimate.

I wrote this account so that others might not make the same mistake we made. In my case, that was not paying enough attention to the ocean; in the California guys case I think it was underestimating the ocean.  But in both cases, it boils down to lack of respect of the potential danger the seas have.

This could have ended in tragedy.  We were lucky no one got seriously injured or worse. Not to mention the potential for putting an end to the Hoe as we know it;  That would be a tragedy as well. 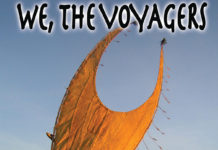