Kevin Mokuahi has paddled most of his life. Like most growing up here in the islands, he spent a lot of time in the ocean. Growing up during the 60’s, Kevin worked at Waikiki Beach with his uncle. His family’s family are all paddlers. Even Nappy Napoleon is part of his ohana. “Imagine if we all joined the same club?” he mentioned as we talked after his first annual Island to Island race. “We’d all be legends.” 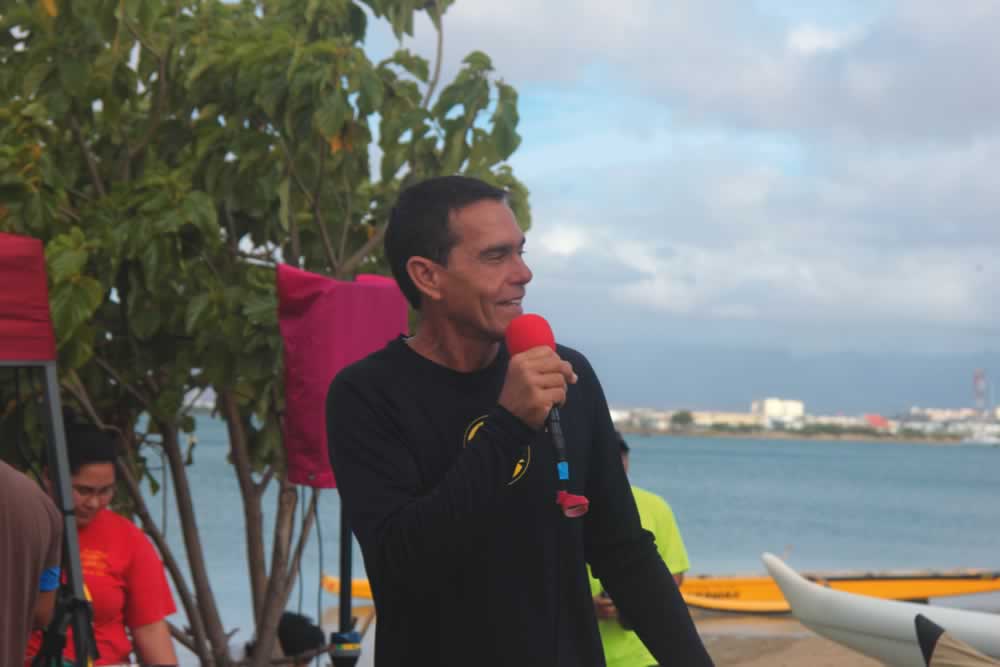 Lokahi Canoe Club was his ‘family’ of choice. (He prefers to call clubs families.) Throughout the 80s, Lokahi was a powerhouse at Na Ohana O Na Hui Wa’a (Hui Wa’a). He paddled and coached at Lokahi for 27 years. His youth program was one of the strongest in the state.

“Watching these kids that I had coached who were then 12 who now are coaching and still paddling makes me feel blessed,” he said. “Paddling is good at getting everyone together as a family. It’s not just about the winning, it’s experiencing the ocean and learning about Polynesian paddling,” he said. “Along with the lord and my family, it is part of my life.”

After nearly three decades paddling with Lokahi, Kevin had to take a break to care for his father. When he returned to paddle, he had a strong desire to give back to the sport that had given him so much. Word of Life Pastor Chauncey Pang had a canoe for recreational paddling; Kevin had coached his son. Pastor Chauncey approached Kevin asking if he could teach his group of recreational paddlers about paddling and that’s how Kevin started sharing with the ministry.

“He knew I had a vision and he had a vision. His goal was to reach out to people. My goal was to get back into paddling and give back to the sport”. Now he shares Pastor Chauncey’s vision and together with the help from their ohana, they formed Olelo O Keala.

“Every club does things differently. We don’t go out and push hard workouts,” he said. “We paddle just for the love of paddling, sharing each others company and paddling as one blade. The main thing is to have fun and enjoy what we are doing. We all have commitments in our lives, our jobs and families, so we only practice two times a week.” (Tue. & Thur.)

Kevin knows canoe paddling can be competitive. “Most of the guys that have been paddling for a long time, paddlers that do the one-man training, paddlers that are always on top, want to go to bigger clubs. I just want people to learn about paddling. Winning is going to come naturally, it’s all about how much you want to put into it. If you want to join a club that doesn’t push, that treats everyone as equals, come on over. We are here to help each other and hit the goals we want to hit. Believe in yourself and the ‘Man Upstairs'”, he said.

In the club’s early days, there were just five paddlers and the recreational church members. Then one day the ministry asked Kevin what they would need to do to join an association. With his background at Lokahi, he knew the steps they would have to take.

“We’ll need a president, a vice president, a secretary, treasurer and a fund-raising committee,” he told them. Then they asked for help from the other clubs for canoes to practice with. Nappy Napoleon of Anuenue Canoe Club lent him a few canoes so he could put together a double-hull, which is helpful when teaching new paddlers the ins-and-outs of paddling.

Olelo grew as more paddlers were attracted to the ohana (family) and supportive atmosphere at the club. Starting with one canoe and The Word of Life ministry’s faith in Kevin and his faith that the ministry could provide the support needed to run a club, Olelo grows while fulfilling it’s mission.

“The first year we had six crews qualify for ‘States’ in Maui. My Novice B men won Oahu’s and got third in the states.” Kevin understands peoples different needs and different strokes. “A lot of paddlers are trying to get real competitive, trying to be like the Tahitians, but who has the time for that?” he weighed in. “I just want paddling to be like how it was when I first started and this is why I’m still doing it after 38 years of paddling and thirty-something years coaching.”

Olelo is a new addition to the clubs in Hawaii. It’s mission is to help reconnect people to their spiritual gift through a canoe and being part of an ohana. Kevin is following his path keeping the spirit of paddling alive.

If you’d like to be part of their family, Olelo O Keala’s canoe site is at Sand Island. More information is online at www.olelookeola.com.

Three Generations Of Foti Team Up

Patrick Dolan on his ‘Molo Solo’