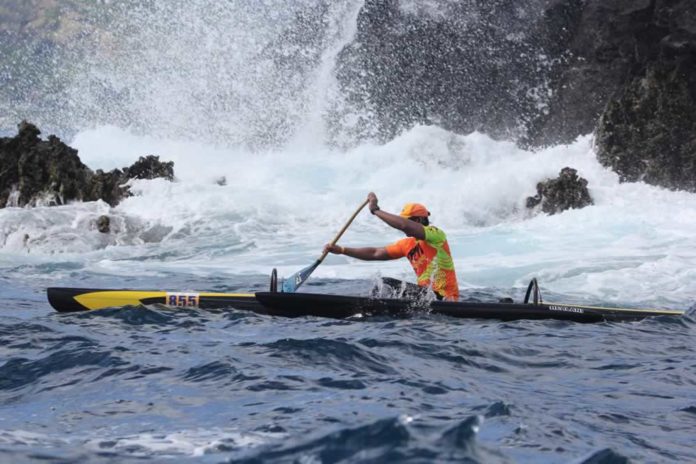 Over the past few months, paddlers have been talking to each other and teaming up to compete in the KIRA #9, MAUI JIM O’ahu Coastal Relay.

The race is another chance to go against the best the sport has to offer.

They came decked out in Surf Skies, OC1s and even two women’s OC6 crews, from Lanikai, showed up to race.

It all started on a beautiful sunny Sunday morning. There was a breeze, enough to say that interplay between paddler and ocean would be a factor in the race. At Kailua Beach paddlers gathered for race instructions and rules. It was ‘Jungle Rules’ for the 9:30am start. The horn blasted and so did the paddlers waiting on the starting line just off the beach. The Short Course started first, with the rabbits set loose, they headed for ‘Sand Bags’ at Lanikai Beach where the first change took place. The long course, the wolves, had more ground to cover. Their first objective was to paddle out and around Mokolea Rock, AKA Bird s#*+ Island before heading down to Sand Bags.

From Sand Bags, the start of the second leg, paddlers made their way across Waimanalo Bay to Makai Pier. After a change at Makai, the race headed down the ‘East Side’ of Oahu, under the Makapu’u Lighthouse, past Hanauma Bay and the fisherman lining ‘Bamboo Ridge’, safely past Spitting Cave and then hopefully jump on a bump to the next swap out area at Hawaii Kai.

The fourth and final leg of the relay went across Maunalua Bay around Diamond Head to the finish at Kaimana Beach. The lingering south swell gave some paddlers coming in the channel a bomb to ride in on.

After the race, the awards and celebrations took place in the shade of a massive Monkey Pod tree at Kapiolani Park.

First overall was The Team of Dean Gardiner and Oscar Chalupsky, of Australia and South Africa, on a Surfski in the time of 3:44:46 . Second overall, Team Epic/ Kai Wai, with paddlers Kai Bartlett and Patrick Dolan of Maui and Oahu, finishing on a Surfski in 3:46:50. The first OC1 team finished in 4:07:40 and was 4th overall, Team Potogeeks, with Manny Kulukulualani and Igor Sobreira. Complete results at www.kanakaikaika.com/events/kira-9-maui-jim-oahu-coastal-relay/#Results.