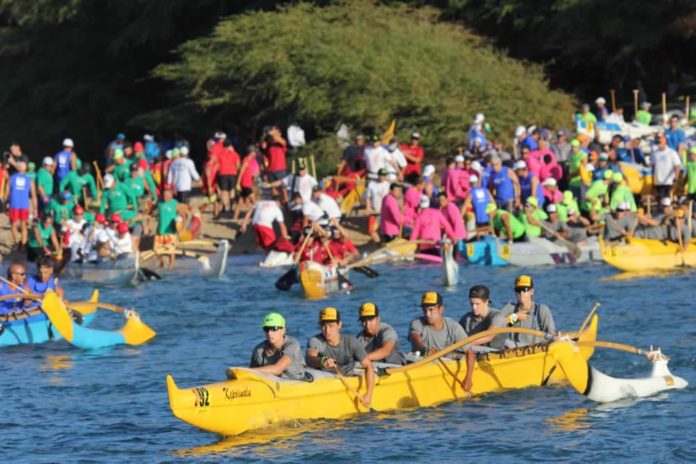 How did this program come together?

Our youth program is as strong in part to Reney Ching, who has guided the kids for the last 15-plus years. She recently retired but continues to serve as a mentor.  Her caring and unwavering dedication to providing the finest in coaching technique and love for the kids has had a positive impact on all our youth, many of which come back to coach as youth coaches.  All of our youth coaches have sons/daughters in the crew(s) they coach, so the ownership is there, and it is not such a task but a time in which they get an opportunity to spend quality time with their child.  They will then follow their child up the ranks… Examples: The following have all coached and followed their kids from 12-18: Kala Kukea & Nalu,  Bruce & Lita Blankenfeld & daughter Tia, son Nai’a, Blane Chong & Kaihe, Myself & sons Kainoa & Makana, Les Look & son Alex, Darrin & Corlyn Orr and son Nainoa and daughter Kaiona, Raven Aipa & son Maverick, Cathy Ho & son Kana’i, Kristi Matson & daughter Brook and son Carter, Eliza Lathrop and daughter Maeve and son Riley… The next generation has been and or is currently serving as coaches… Tia, Kaihe and Kainoa,  thus the cycle continues of our mentoring our kids and the importance of giving back in the capacity of volunteering for the larger community, for example Hui Nalu and Hawaii Kai.

Tell us about some of the programs you have for kids?

We have such a large number of kids under 12 that this Open Keiki crew (ages 6-11), provides an opportunity to race at regattas. Several of our kids spend four-plus-years in Open Keiki before breaking into the 12-&-under.

We brought back our Surf-SUP contest to the club because when I was a 12 through 15, we had a surf contest outside the Thompson’s Paiko house and we had a ton of fun, trophies for best wipe out. Darrin Orr now takes the lead on this event.

We have an Ice Cream social sponsored by Reney Ching and Hui Nalu. Kids are rewarded for their hard work going into the state race.

Movie Night is a fund-raiser for the States. I decided our youth needed an opportunity to fund-raise and have fun so on movie night we have a BBQ dinner where parents BBQ burgers, kids bring the baked goods, popcorn, etc and the kids sell the meal. It’s a BBQ  with a movie under the stars.

The Kala Kukea Race is a pre-season opportunity to race everyone in the bay.  Reney Ching & Kristi Matson continue to organize the keiki part of this race.

We always take part in the George Perry (Lanikai CC) event to provide our youth an opportunity to race prior to the beginning of the regatta season.

Molokai Hoe- This year was the first year Hui Nalu entered a junior boys team. The boys had the interest and parents Elana Pflueger, Nedra Manson, Kehau Lau and Danny Sheard showed support.  The boys, all 16 and 17, finished 3rd out of five teams so they have two more years to improve in this junior division.

When you started, who were your coaches?

I was 12 when I began paddling at Hui Nalu. That was the first year Hui Nalu was in Hawaii Kai. Shoots, that is 41 years ago. I was coached by the greats, like Kala Kukea, Sammy Steamboat, Nainoa Thompson, Myron Thompson, Bruce Blankenfeld, Tommy Conner, and Steve Scott, all of who have contributed to my decision to take on the role as the Head Coach.

What kind of program do the kids go through?

Lots of paddling, cross training while waiting on the beach although we do our best to keep this to a minimum…

We have cross training a few times a week after practice for all members, some have taken to the cross training.  The 12’s do a lot of swimming, the older age groups incorporate a lot of running.

Seasonal for the younger ones, although with the OC-1 becoming more popular, many of our kids have taken to the one man as young 14 years old and competed in the solo Molokai to Oahu (Kaihe Chong, Kainoa, & Makana Darval-Chang, Alex Look , Carter Matson, Maila Mizuno & Kelsie Cottrell in the OC-2).

Do the kids race?

Yes, it our club policy that all members race at least one time per season.

More on Hui Nalu and it’s youth program is at their website, huinalucanoeclub.com 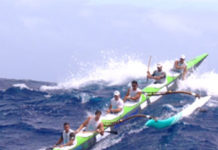