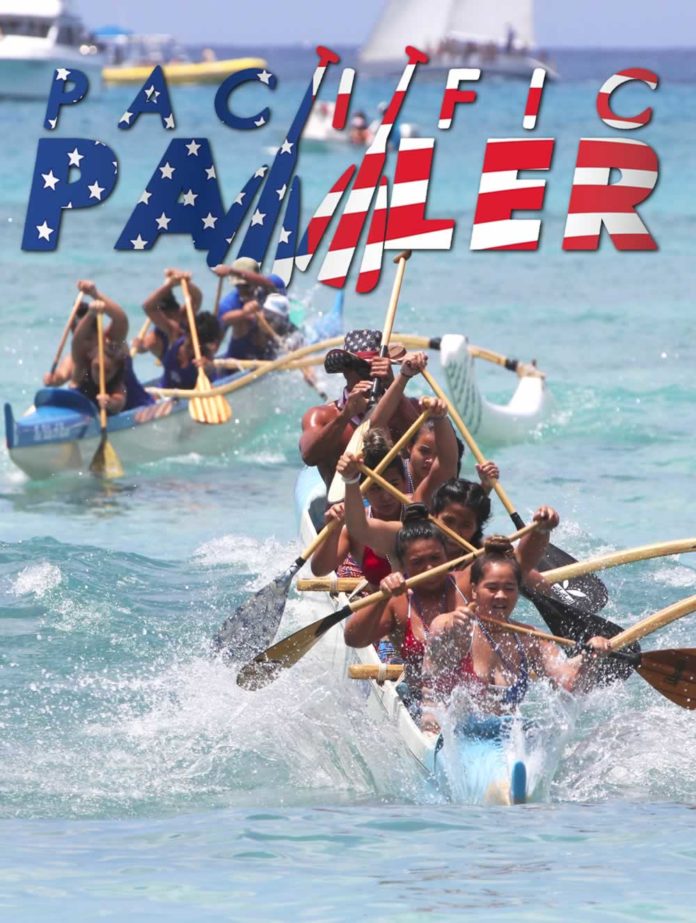 V1 stands for one-person va’a. The Tahitian term va’a is used to differentiate it from an OC-1 (one-person outrigger canoe). V1s are traditionally defined by an open cockpit and no rudder.

Is it hard to paddle?

Because you have to steer with your paddle, the V1 has a much steeper learning curve than the OC1. If the wind is blowing hard from the side, you may have to take 100 consecutive strokes on one side to compensate. When you’re trying to catch a wave, it can be really difficult to simultaneous apply explosive power while turning the nose in the direction you need to go. And then when you drop in on the wave, you need to put all of your focus into keeping the canoe straight. But, the challenge and purity of steering with your paddle is also what makes it so rewarding.

What conditions do V1s work best in?

The direction and speed of the wind determines whether a V1 is suitable. Because the hull is more efficient, an experienced V1 paddler can be faster in flat water and upwind than they would be on an OC-1. In straight downwind conditions, V1 paddlers are generally only slightly slower than their counterparts on an OC1 just because the canoe can be harder to connect between waves. As the wind comes more from the side, V1 paddling gets progressively more difficult because the canoe will always want to round up into the wind. Novice V1 paddlers should not go out on windy days or downwind runs until they have spent a lot of time on the canoe.

How do V1 designs differ from OC1?

How do you keep the cockpit from filling up with water?

In rough ocean conditions, the cockpit will take in water. All of our Ka’iwa come with a footpump that attaches to the footbrace which will allow you to suck water out with every stroke. While the footpump will keep the canoe dry in most ocean conditions, it is possible to fill up the cockpit after a huli. The canoe will always have positive buoyancy (because bulkheads seal off the bow and stern), but it is important to practice recovering from a huli to make sure that you are able to partially drain the canoe by pushing the cockpit upwards as you flip it back over. Even with a footpump, it is important to always bring a bailer with you.

Where do people race V1s?

Other than Hawai’i, V1s are the dominant form of racing craft throughout Polynesia. They are also used exclusively in the IVF World Sprints and IVF World Distance Championships. There is also a growing contingent of dedicated V1 paddlers in Hawai’i who are entering each island’s OC1 series.

We are always tinkering with improvements and we’ve been planning to update the Aukahi for a long time. Designed and released in 2009, it was our first V1. Because the Aukahi has very little rocker in the front, its long waterline makes it efficient in the flat water and its large midsection gives it the volume needed for rougher conditions. However, the volume and length also make it a bit unwieldy for many paddlers. While the long waterline through the nose helps gain speed and efficiency, it also gives the Aukahi a narrow window of control. The steering is stable for a 10-15 degree window, but once the bow of the canoe leaves that small window, the bow will often control the boat forcing you to either spin out or expend a lot of energy trying to hold it straight. Our goal with the Ka’iwa was to widen that window of control and to make a V1 that would be fast in all wind angles and ocean conditions.

Using our Pueo as a rough starting point, we modeled a hull that we knew was both efficient and could surf well. Then we started stretching it out to gain efficiency and control until our software based drag estimates stopped improving an appreciable amount. This left us with a length 6″ shorter than the Aukahi and many other V1s. Getting the same flat water speed out of a shorter length comes with the added benefit of making the canoe more maneuverable, having less windage, and being able to fit better into an open ocean trough. We were also able to move both the center of buoyancy and weight of the paddler forward, which enables the canoe to drop in easier without sacrificing speed. The final improvement was to tighten up all the features on the deck to give it a lower profile than the Aukahi, so it’s less affected by cross winds.

What’s been the response?

The Ka’iwa is the best rudderless we know how to build, and we believe it’s the best all-around V1 on the water. But we’re a bit biased, so don’t take our word for it! Get in touch with us to schedule a demo.

Do you offer V1 lessons?

Yes! If you live on O’ahu or Kaua’i, contact us at info@kamanucomposites.com to schedule a V1 lesson.

“Ka’iwa accomplished a few really good things. You have the control to squeeze out 3-4 more strokes to get into bumps than the Aukahi. And it feels much less mid ship float, so it can drop in way later than you’d expect. Like I thought I was too late to get in on a couple, but once the poke is pau, it can drop in on its own. It can also pound over bumps really well.” – Christian Marston

“Kamanu Composites said this was the second Ka`iwa V1 off the production line. I waited 8 months and sold 2 boats for this but it was soooo worth it!. On her maiden voyage yesterday I did a 14 mile upwind/downwind from Kaimana towards Hawaii Kai and back in light trades. This V1 is much easier to control than my previous one. Going upwind on a V1 is even better than an OC-1 because the nose pokes through the chop rather than up and over for a much smoother ride. Going downwind was super fun as I could steer and stay on the bumps without too much trouble with my limited V1 experience, which is saying a lot. Best of all is the satisfaction of riding something hand crafted with pride right here in Hawaii. As you can see it’s a beautiful and precise work of art.” – Jeff Chang