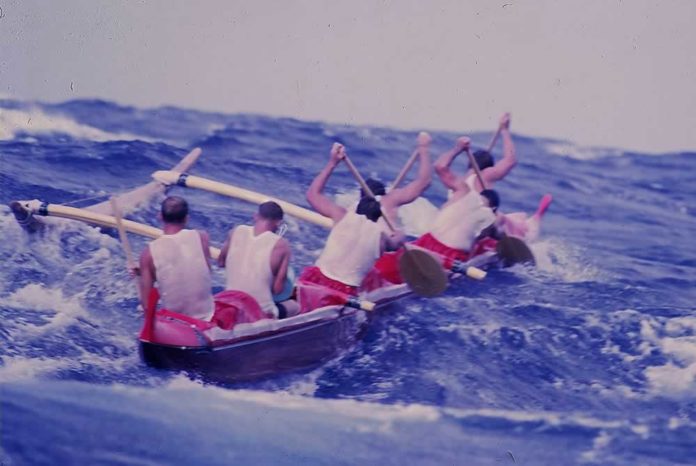 Fifty years ago, one of the most memorable races across the Kaiwi Channel took place. Paddlers who participated often say it was truly unforgettable, and these days the race would have almost certainly been cancelled because of the  violent conditions. “Of all the races Iʻve ever done, I will absolutely never forget that day!” recalls veteran paddler Nick Beck who was part of the winning Waikiki Surf crew.

With twelve crews entered and apparently increasingly stormy conditions, there was some discussion the night before about calling off the race.  However as Nappy Napoleon remembers it, “We were all experienced surfers and watermen, so even if the race was officially canceled, we were going to paddle back anyway.

The following compelling description of that epic day comes courtesy of Nick .  As you can tell, fifty years have not diminished the memory of that unforgettable day!!! Read it and you can imagine what it must have been like to have been  a member of that crew!!! Mahalo Nick for sharing!!! We are all in awe of you guys!!!

It’s amazing to realize that we paddled and won that epic race exactly 50 years ago. 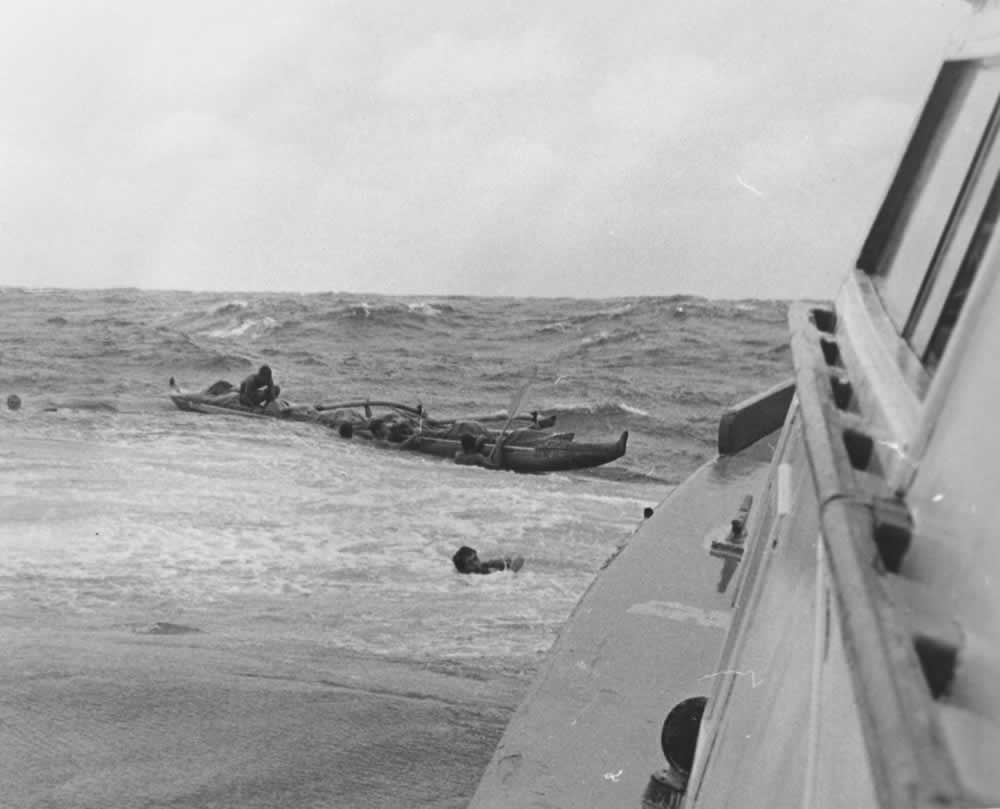 I had already been paddling Molokai races since the early 60’s when we camped and left from Kawakiu Bay before the start was moved to Hale O Lono Harbor. I loved that Kawakiu start because after several hundred yards out, you were already in the channel and in a much better line, further north, for some good surfing conditions.

Since then, I have crossed the Molokai Channel so many times I’ve lost track, MO races, OC1 races, Sailing Canoe races and just doing my own inter-island canoe adventures. I’ve even won a few of these events, but every crossing is a winner.

Of all of these, “MOLOKAI ’66” is still the standard of what MOLOKAI is all about.

This ’66 MO was the race I wanted most to win. I felt driven to win this race. It was the race I trained the hardest for. The memories still burn in my mind. I had been paddling mostly with the Outrigger Canoe Club where I also coached. After I graduated from USC and spent a graduate year at UH, I moved back to Kauai and paddled with Kauai Canoe Club. 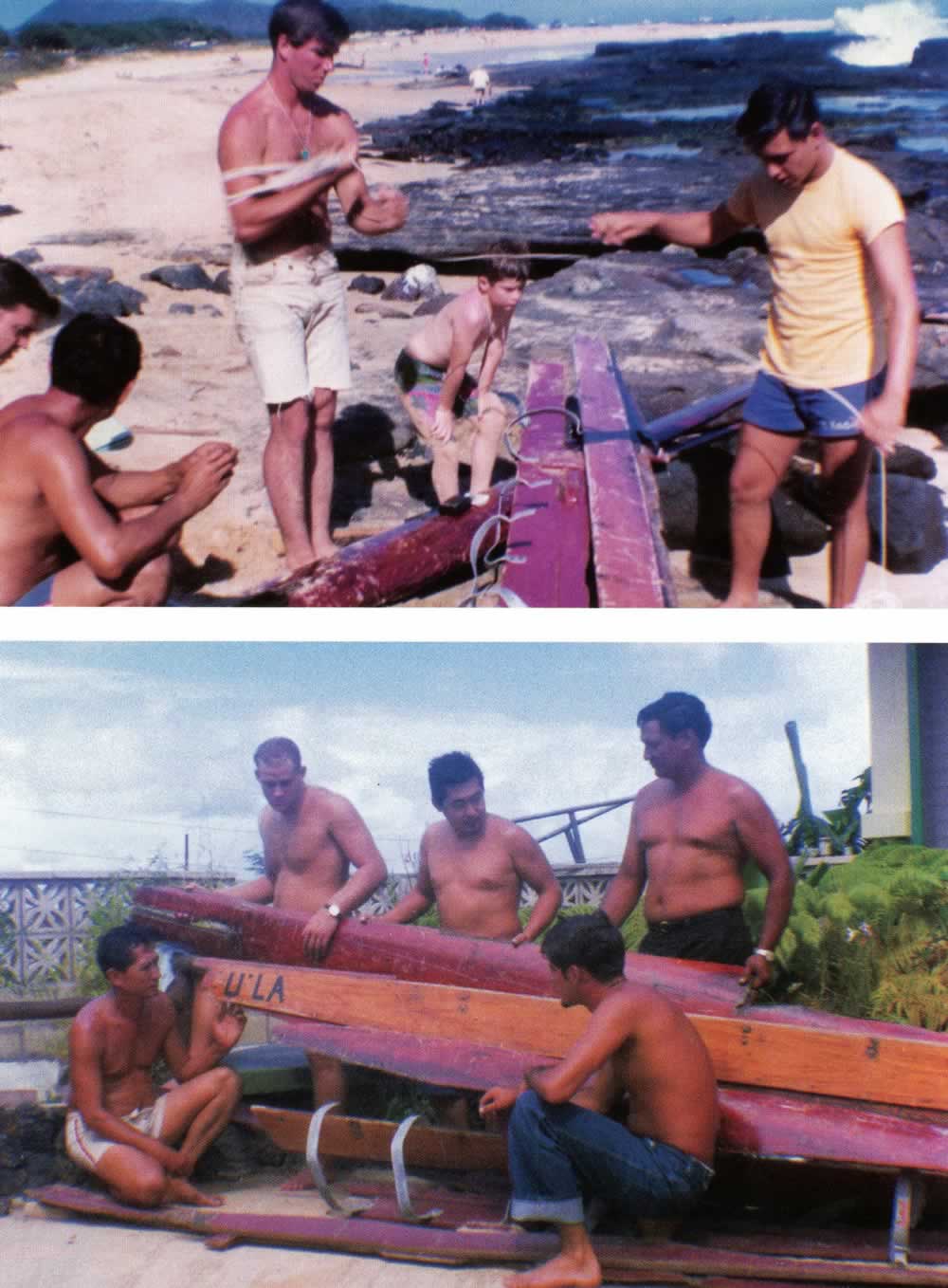 In 1966, I returned to Oahu to complete my Master’s degree program.

I was working as a Lifeguard with the City and County of Honolulu, and I started paddling with my old time competitors and close friends at the Waikiki Surf Club. Growing up my paddling heroes were the WSC men’s crews:  Wally Froiseth, George Downing, Moki Perkins, Dutchy Kino, Blue Makua Sr., Blacky, Joe Gilman, and a host of others.

To paddle with Waikiki Surf Club was a true honor. My heroes were still around, but my paddling buddies there were now just a bunch of contemporaries and old friends; Nappy, Mike Tongg, Randy Chun, Jeffery Chee, Blue Makua Jr., Andy Miller,  Richard Hennings, Val Ching, and a whole bunch of others hoping to make a WSC Molokai Race First Crew. Even our “old” friend Rabbit Kekai joined us to train and paddle for this race.

Our training was long and intense. I was so focused that whatever time we spent on the water, I doubled it on my own, running, swimming or surfing …hard. When ever I did this, I always chanted only three words in my mind…“Win Molokai, Win Molokai…Win Molokai.”

When we started the race at Hale O Lono, Duke Kahanamoku was there to follow the race in his power boat. Duke was a family friend. My dad was his Dr. and Duke was a respected mentor and hero. I saw him briefly before the start. His words were simply, “Do it Nicky, Do it.” 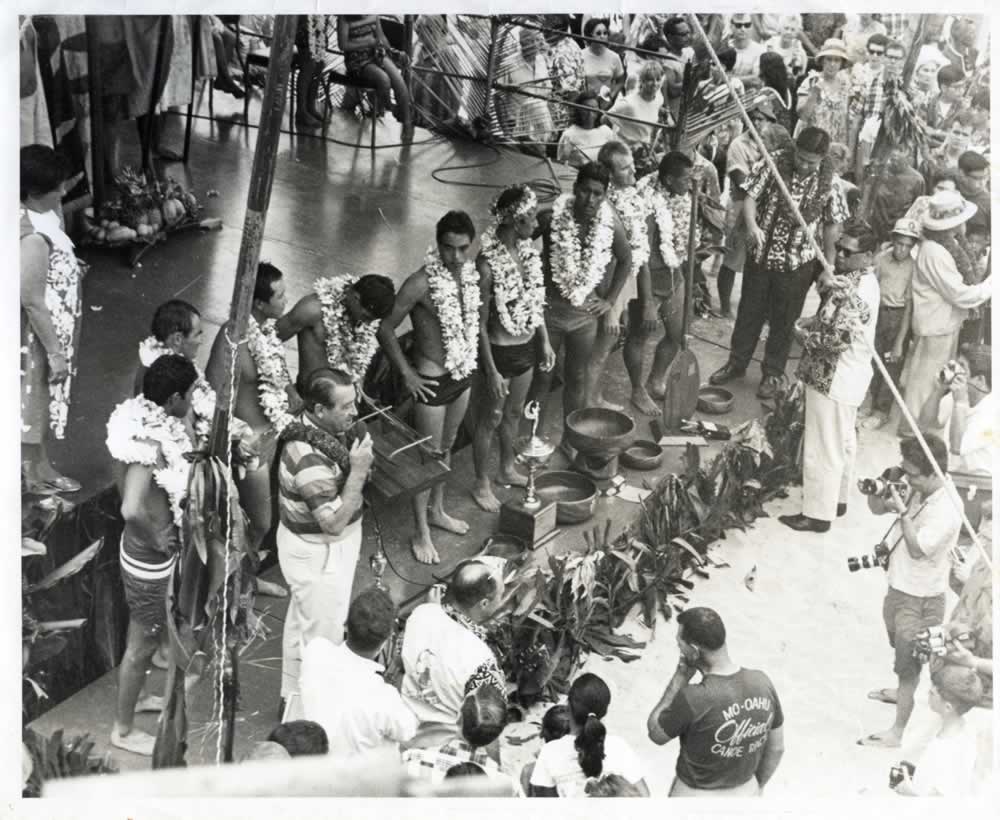 The start of the race off of La’au Pt. was really just another sort of choppy, bumpy race start. Nothing at the start gave us any indication of what was to come. Then, as we hit the open seas, it started; a bit bigger seas, a bit more wind, a bit more slop. Still nothing exceptional and the race was on. The same words pounded in my mind every stroke, “Win Molokai.”

As we got further into the channel, the surf got even bigger. Swells started breaking and rolling from the crest to the trough.

We were in open water and it was really Molokai, but still not huge. We did make sure that every paddler took turns zipping up and tying the spray skirts tight around their waist as waves started rolling over us. We were out of sight of Molokai. The winds began to pick up.

A cross swell hit us, the ama lifted, and in a split second we were upside down covered by breaking waves.

The “Huli drill” went into effect.

Someone grabbed the loose paddles, and while the canoe was still upside down and filled with air, not water, each paddler tied his seat cover as  tight as possible so that when we flipped the canoe back over, waves wouldn’t fill the canoe. That drill would save us more than once that race. But we didn’t know that then. The worst was yet to come.

We righted the canoe and got in fast. We all zipped up at once and tied the spray skirt waist bungies high and tight. We paddled and one person bailed with one hand on the cover to hold it closed when more waves broke over us.

It seemed like we were up and away pretty fast. This was the first time I had ever had a “huli” in the MO Race. From the escort boat Wally Froiseth, yelling through a speaker, encouraged us on.

Now it was really a different sort of sea. It was BIGGER. It was darker, the wind picked up even more, and the swells turned into waves. The waves started actually breaking and throwing out instead of just rolling.

Suddenly, we were running down a good size breaking wave. We were buried in white water as the ama was driven down and then under us. I remember the noise from the roar of white water…then silence. We were upside down, still zipped in with waist bands tied tight. Some how Rabbit got out first.

I was stuck in my seat and couldn’t untie my bungie. I had to push off the bottom of the hull while still upside down to escape. I surfaced in the foam, sucking for air.

Wally Froiseth was yelling at us from the escort boat. “Keep it dry, keep it dry. Get in and go. That was a FREAK. It can’t happen again, just go!”

Somehow we got going. Now it was REALLY BIG. On the escort boat, every one had to stay down. Waves were washing over them also, and I later learned that a window had blown out. The filming was over. It was too rough and dangerous to try to hold onto a camera anymore. On the escort boat, it was find something and hang on with two hands.

In the canoe, our beautiful 40’ Koa hull Malia, the real race had actually just begun. We were now well past mid-channel .

As I looked ahead, all I could see were mountains of water racing down the channel ahead of us. Some were white on top as the wind peeled the crests and sent water cascading down the face. Then to my horror, I saw a swell not far ahead of us suddenly turn into a steep wave and then the white water threw out and it was a tubular angry breaking beast.

“My God,” I thought, “if one of those hits us we’re gone.”  I remembered Wally yelling to us that our prior over the falls episode was a freak occurrence and couldn’t happen again. I wasn’t so sure. We all just kept paddling.

It was dodge ball or just plain luck. The monsters got bigger, uglier, and meaner. They broke outside of us, in front of us, behind us, along side of us. Somehow Rabbit kept us going, occasionally actually surfing and sliding down the faces of gigantic, almost black sickening walls of water.

The “Win Molokai” mantra turned to “Please don’t let one of those things hit us,” but hit us it did. We were deep into another wave. It loomed above us then white water threw out and buried us. Tons of water crushed down on us. My head was slammed against the iako. The bow of our Malia was driven deep into the dark water. The ama disappeared under us, and we were pinned in our seats. The white water was foaming as it rolled over us on its way to some place hundreds of miles south of Oahu.

We all just reacted in the right way; we grabbed the paddles, got the Malia righted, tried our best to keep the Malia dry, got back in, bailed the water, and off we went.  Rabbit was brilliant! We angled toward Oahu and flew down more monsters. Somehow we were missed by any more of what must have been Rogue Waves. I now firmly believe in the Rogue Wave phenomena! I saw them then and have seen them since. They exist and are freaks of nature. They are awesome, but they are also terrifying.

Soon we were near the churning mess off of Koko Head, and Wally called for a crew change. It had been way to dangerous to put anyone out in the ocean during our past open ocean session.

I got out of the canoe. A few guys had been sea sick. I’m sure that I would have been sick also had I endured that in an escort boat. I wanted back in the canoe. Fast. Wally called another change as we got into smoother seas. The race wasn’t over. I got back in at number one seat and knew I had a crew of strong hungry paddlers behind me: Randy, Nappy, Blue Jr., Val and Rabbit.  It was back to the old chant…each stroke faster, stronger…“Win Moloka’i.”

We flew down bumps past Diamond Head, which was lined with cars, past the good old Natatorium, our Lifeguard Headquarters.

For a second, I bet that the Guards on duty had a busy day. Then we were turning the Kaiser Buoy and home.

No other canoes were on the Hilton Hawaiian Village Beach.

We had won. We had trained hard, paddled hard and been very lucky. Other crews were not so lucky. Some never finished, their precious Koa canoes crushed and destroyed in the raging seas of the Molokai Channel.

Now more than the win,  I recall that experience as my most Memorable Race of ALL TIME.

I know many of the paddlers in many of the other crews. They are amazing paddlers. Then and now, some still going strong. They are Coaches, Inspirations and friends.

Some are no longer with us. Our Waikiki Surf Club Crew has lost Wally Froiseth, Mike Tongg and recently, Rabbit Kekai.

I feel that this 2016 Molokai to Oahu Canoe Race, Fifty Years later, should be dedicated to ALL  the men, here today or in Paddlers’ Heaven above.