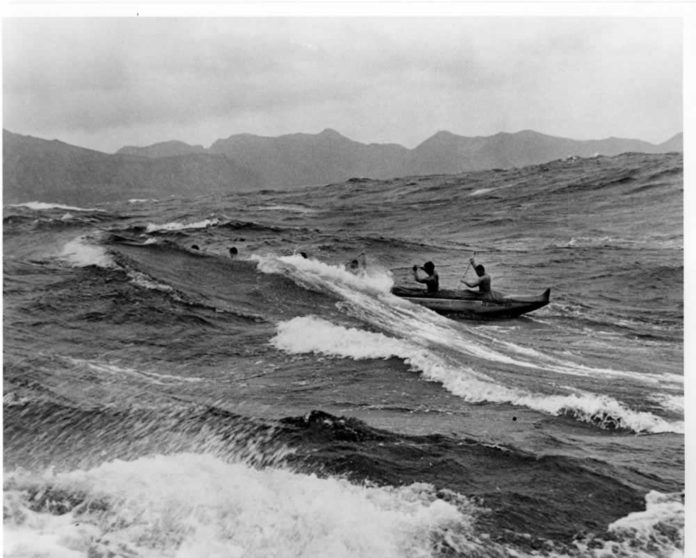 This additional account is excerpted from Molokai-Oahu through the Years, the definitive historical work about the race published in 2006:

1966 Whenever paddlers get together and talk of rough seas and violent conditions, the fifteenth crossing in 1966 remains to this day the yardstick by which all subsequent races are measured. The wind had been blowing steadily during the days leading up to the race, with small craft warnings being in effect. Skies were ominous on race morning as the relentless wind continued to blow with increasing ferocity. This epic crossing would more than likely have been cancelled were conditions the same in the present era. As the 12 canoes took off from Hale o Lono to become part of a storied chapter in the history of the race, no one really anticipated the fury of the ocean that was to turn a race into a battle for survival for both paddlers and canoes. Nick Beck, paddling for Waikïkï Surf Club, thought that it “wasn’t too bad” as the canoes ventured into the channel after leaving Lä‘au Point, but soon the roaring wind began blowing low clouds past with gusts to 40 mph. The first casualty was the Maile Sons, who were towed back to Moloka‘i after swamping an hour into the race. Swells began to become mountainous running in the 15- to 20-foot range, and by mid-channel it was clear to everyone involved that this crossing would never be forgotten.

Aaron Young, a member of the Lanikai crew, said that of the nine paddlers on the crew, four including the steersman became so seasick they were unable to continue. As a result, he jumped in to steer the canoe but the number five seat was open creating a constant problem with water coming into the canoe with every wave that washed over the boat. Around three-quarters of the way across, Aaron recalled waves so big he was looking down on their escort boat and up when they were in a trough. Then he remembered: “I looked behind and saw this huge set coming. I must have said something because the paddler in the number four seat – I think it was Dougie Hooper – yelled, ‘What Aaron? What’s happening?’ I said ‘Don’t turn around! Just paddle! Just paddle!’ But he turned around anyway, and he saw this wave coming and his eyes got so huge. And he started yelling, too, ‘Paddle! Paddle!’ And we made it down. I couldn’t believe it. We surfed that first one. Then the second one. I said, ‘Dougie, one more!’ And we made it down again. But the third one. We went almost to the bottom and then it broke at the top. The white water got us and that was it, as the water filled up the hole. We were fortunate. We never lost the canoe. We had the Moku Lua. They took us in at Paiko’s Lagoon to the beach, and we never finished the race. I was living in Lanikai at the time up on the hill overlooking the ocean. I got home and I looked out and the whole horizon was nothing but white water.”

At mid-channel defending champion Outrigger and a rejuvenated Surf Club crew were in the lead, but soon the elements were the biggest concern for the leaders. First, following an Outrigger crew change, the Leilani began taking in water because of a broken zipper on the canvas at one seat. On the next change, in his haste to exit the canoe, a crew member pulled the zipper completely off its track. With the integrity of the canvas gone and water inundating the boat, the crew began a futile effort to keep the canoe from swamping. Losing that battle, the next task was to somehow refloat the canoe. Over the next two hours, the violent seas frustrated every exhausting attempt, and soon even rigging an effective tow line proved to be an impossible task. Now saving the Leilani became foremost in everyone’s mind.

Fred Hemmings, paddling in his first Moloka‘i race, recalled the subsequent events: “Finally we got a knife from the Boston Whaler chase boat and cut the rigging. Sherry Dowsett, the skipper of our 56-foot escort boat the Hula Kai, managed to position the boat just ahead of the Leilani. Basically we got the canoe up close to the stern of the Hula Kai and when a big swell came, we grabbed the bow of the canoe, lifted it up, and dragged it in. But it was like a huge lever being moved by the sea on the transom of the Hula Kai. At one point, the water dropped down and it went up against the roof of the Hula Kai. The canoe seemed to be lifting the roof, and I thought my God it’s going to snap like a twig. Fortunately the water came back, and we were able to shove the canoe further inside the boat but the gunwales were ripped off and the manu was damaged. I’ll never forget coming back on the boat that day. We were in a zone of complete exhaustion, and we were just stunned by the whole experience.”

Other canoes were not so fortunate. The Order of Kamehameha koa canoe was broken in half by a huge swell, but they managed to save it. The worst fate was to fall upon Kailua’s Uwila, the beautiful koa canoe with two prior wins to its credit. About halfway across, the Kailua crew was doing very well when they were broadsided by a 15-foot wave that broke over the canoe. As in the case of the Leilani, an earlier crew change resulted in a torn zipper, and water poured through the gap. Soon other zippers began pulling apart. “I think it was the weight of the water,” coach Stew Kalama said. “The talons on the zippers just couldn’t hold together. I even tried closing the gaps with clothespins. But the water came in too fast. We couldn’t keep it bailed out.” Next an even bigger wave hit the canoe, burying the floundering craft. Then came over 40 minutes of trying to bail it out as the big swells frustrated every attempt. “Every time we got about seven buckets of water bailed out, another wave filled it up again,” Kalama recalled. “Finally we had to give up.”

Journalist Bob Krauss of The Honolulu Advertiser described what happened next in a piece entitled “Death of the Uwila”:

“Then began a heart-breaking attempt to save the canoe. Kalama said the tired paddlers first tried to pull the 39-foot canoe onto the escort boat, a small cabin cruiser. A large wave caught the canoe and smashed it against the boat, ripping away part of the canoe’s bow and the outrigger.

“Next Kalama and his men tried towing the canoe. ‘We put a double hitch on her – one around number one seat, and one around the bow.’ Kalama said, ‘But the weight of the water in the canoe made her drag. The rope around the hull got so tight that the bow began to collapse and the bottom split. Then the tow rope broke.’ “In the meantime, it was difficult to maneuver the escort boat because of the high seas. At one point a wave broke so high over the bow it flooded the open cockpit behind the cabin.

“Kalama and his paddlers made a last futile effort to haul the broken canoe onto the boat. The 12 men on board got the hull half way out of the water when an enormous wave dashed it against the escort boat and broke it in half.

“The coach, exhausted by more than an hour of fighting the waves, said he fell to the deck and began to weep pounding his fists against the cabin. Suddenly steersman Gary Murakami dove into the water.

“‘Gary had paddled that canoe since he was 14,’ Kalama said, ‘He said he wanted to bring home part of the Uwila. Before anybody could stop him, he jumped over the side with a knife.’

“Murakami swam to the wrecked canoe. The broken outrigger stuck out of the water at an angle, like the wing of a crippled bird. He cut loose the ama and swam back with it.

“The club has one other koa racing canoe.

Leaving the wreckage of the Uwila, the exhausted and shocked crew headed for home. In the following week, pieces of the ill-fated canoe washed ashore in the Sandy Beach area. A piece with the name of the canoe hung on a shed at the Kalama family home as a sad reminder of the sea’s savagery that day.

Surf Club, meanwhile, encountered similar problems as the Malia flipped three times during an hour and a half of battling the fierce conditions in mid-channel. The crew was able to keep the canoe bailed out with no canvas problems. Twice the canoe went over the ama recalled Blue, Jr. These dangerous flips did result in more air getting in the canoe with less bailing. 14-year veteran Rabbit Kekai, steering this year for Surf Club, said, “It took us 15 to 20 minutes each time to flip over the canoe again. This was the roughest race yet. But we never gave up.” With most of their competition in worse trouble, Surf Club built a lead that they never relinquished, finishing three minutes ahead of Healani’s fiberglass entry in 6:37. Healani’s coach Clement Pai‘aina said their canoe went over three times as well, the first time only three miles from the start. Second in the koa division and third overall was an improved Moloka‘i crew, who made it across without a swamping.

A crowd of over 2000 waiting at the Hilton beach enjoyed Aloha  Week entertainment and welcomed only six of the original 12 canoes that entered the race.

All participants became part of a historic and memorable crossing, one whose stories will be told and retold to coming generations of paddlers

For more photos and coverage of the race, see pp.49-55. Some copies of Molokai-Oahu Through the Years (ISBN 0915013525) by Peter Caldwell are still available through Amazon, Island Paddler, Bess Press, and the bookʻs website (molokaicanoerace.com).