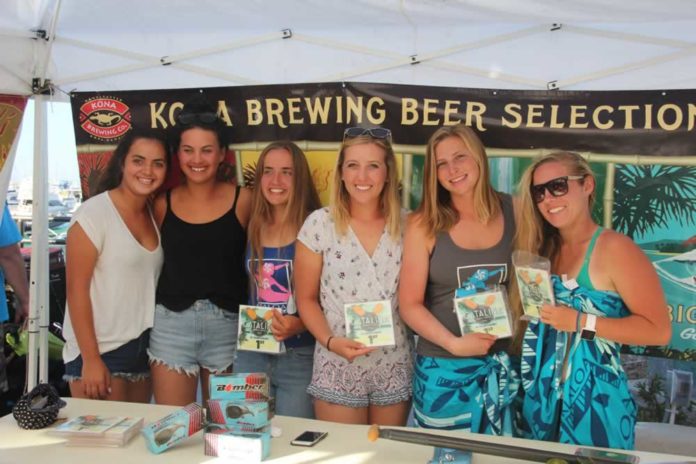 At the Newport Dunes, crews were scrambling to get ready for 30 miles of racing in the Catalina Channel Crossing US Championships. The starting line was at the end of a 2-mile warm-up paddle from the Dunes, located across from the Newport Aquatic Center, to the mouth of the Newport Channel. Lining the banks of the Channel are some of the most exclusive properties in Southern California. 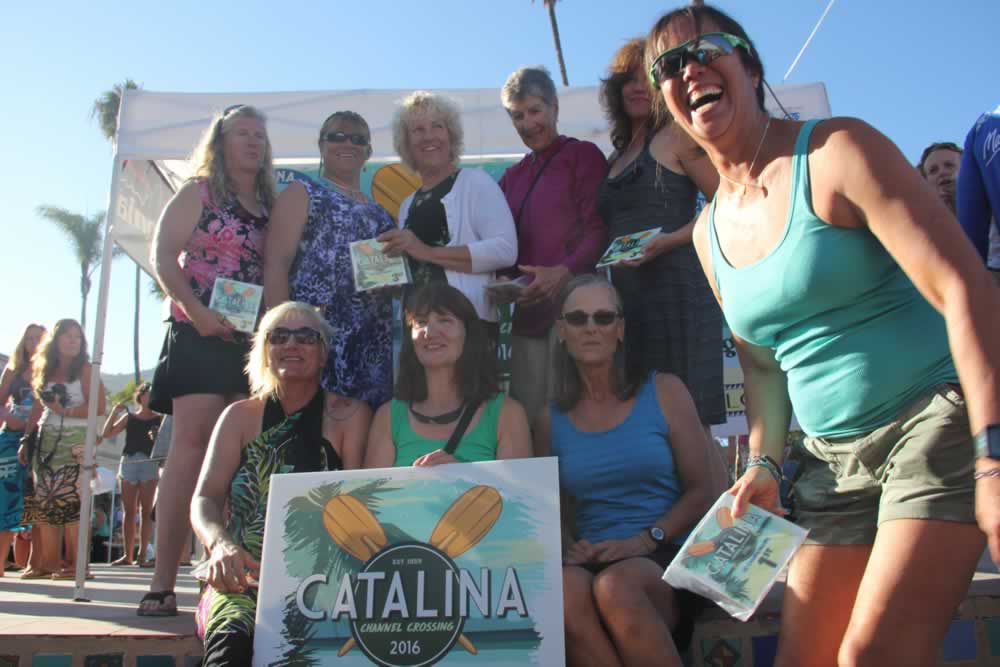 The race was to start at 8am a quarter-mile out from the channel entrance. There 75 outriggers line up on a glassy, rolling ocean. Behind the racers, a small fleet of escort, safety, and official boats ease into position. Billy Whitford, patrolling on Safety Boat 1, tries to settle the racers down and lines them up as straight as possible. Billy jokes that with all that adrenaline surging, it’s hard to keep them from taking off. He pleads with them over his PA system to hold back and finally asks that paddlers hold their paddles in the air. Once satisfied it’s as straight a line as it’s going to be, he signals the OK for the race to start. The horn blows, paddles churn the water, cheers erupt as the race gets underway. The steersmen set their sights on the official lead boat’s big red flag and follow it to an island now shrouded in low-hanging, grey clouds. 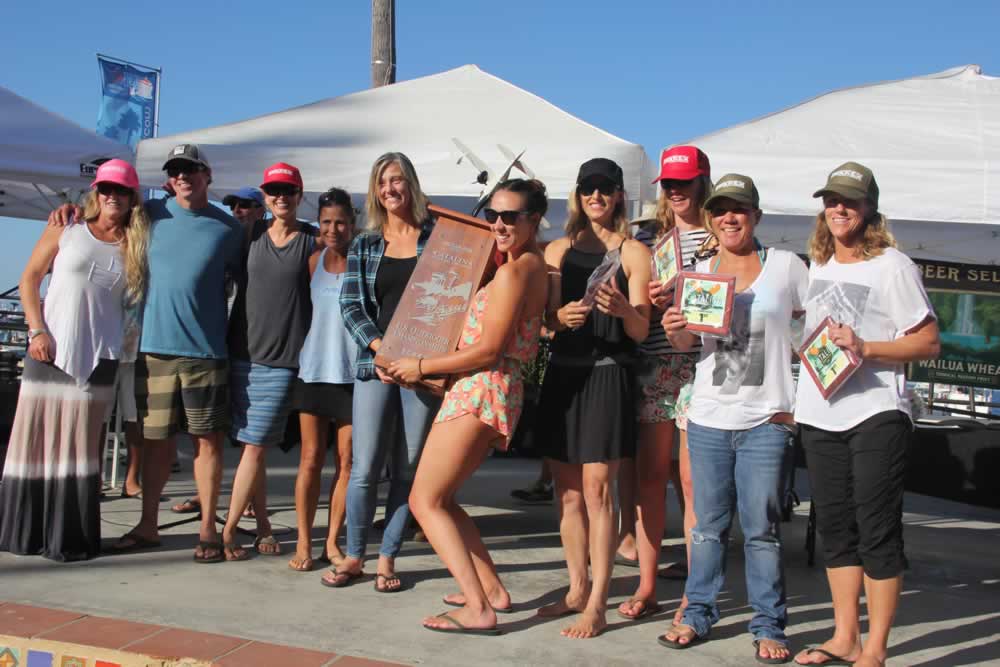 The crews settle into race mode, follow their change charts and swap in and out of the canoe every 10-or-so minutes.

Out on the course, Billy and Race Guru/Logistics Master ‘Uncle’ Bud Hohl make their way past the canoes and their escort boats, checking in and helping out if needed.

By mid-channel, the clouds had been pushed out of sight from a slight northerly breeze that also kicked up a swell on the ama-side of the canoes. Now crews paddle into the wind and chop. Two hours into the race and the canoes are now spread out over three miles. The island is in sight, and the Catalina Casino is an easy landmark to aim for. The iconic circular building was built to be a casino, but it never became one, instead it holds functions and is a place for the community to get together.

The top three crews who took the lead just outside Newport were also the top three to finish. The fastest crew to Avalon Bay was the Santa Barbara OCC Co-ed crew who finished in 4:35:54. The second crew and winner of the Women’s Division was Dana OCC (4:38:57).Lanikila OCC, 3rd overall, were second in the Women’s Unlimited Division and Hui Nalu from Hawaii placed third (4:49:17).

The great thing about this sport is that it’s not just limited to the young. Paddlers in their 70s were also taking part. Another division claimed by Dana OCC was the Golden Masters Division. Dana’s crew finished in 6:25:35. The only other crew of Golden Masters was Oceanside OCC, who hammered for 6-hours and 53-minutes to reach the finish.

Dana OCC was on a roll also winning the Senior Masters Division in 6:07:32. O Kalani OCC was the other Senior Master crew crossing the channel in 6:28:56. 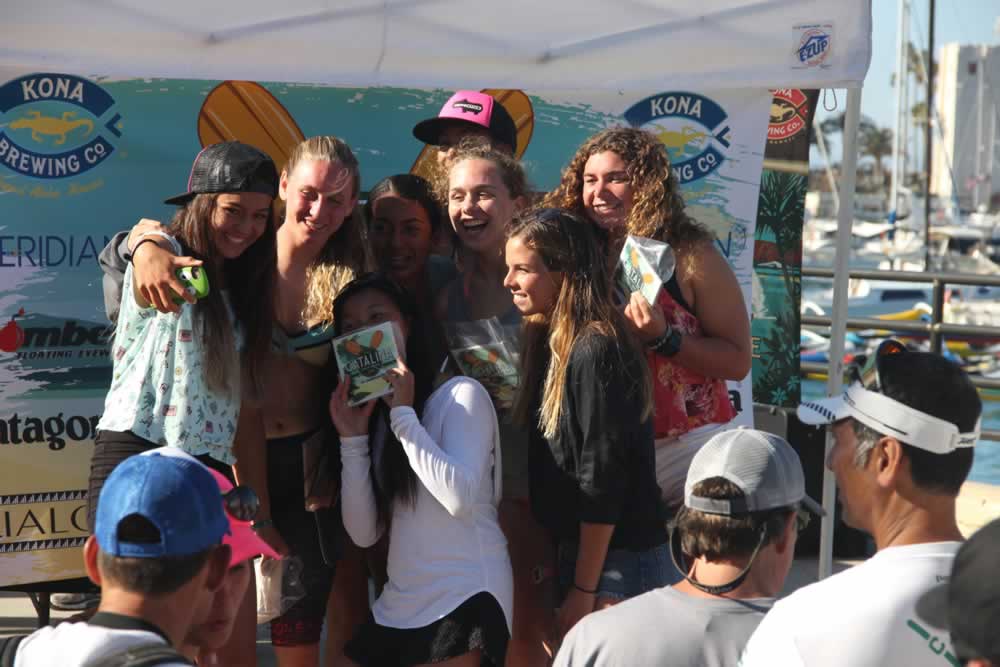 The last blast of the finish line horn came nearly 3-hours after the first canoe glided into Avalon Bay. Kapoliokaehukai OCC had that honor finishing in 7:29:00.

The Awards Ceremony was held at the Wrigley Stage on the promenade fronting the Avalon Bay. Music from the Kalama Brothers warmed-up the crowd along with a beer garden and Kona Brew on tap. The day’s winners got their awards, and the mayor of Catalina, Ann Marshall, awarded the Mayor’s Cup to first place overall women’s crew Dana Outrigger Canoe Club. After the awards, some of the competitors took the Catalina Flyer back to Newport while the others stayed behind to party and celebrate their races. Catalina is a tourist destination and knows how to take care of their visitors. Most the men, though, were laying low because their race was the next day, Sunday September 11th.

Boats came in and out to pick up paddlers, canoes untied from their moorings and paddled out to meet up with escort boats, official boats moved about, taking care of business, the Coast Guard and Harbor Patrol cruised around, watching and standing by to help keep the commercial boat channel open. 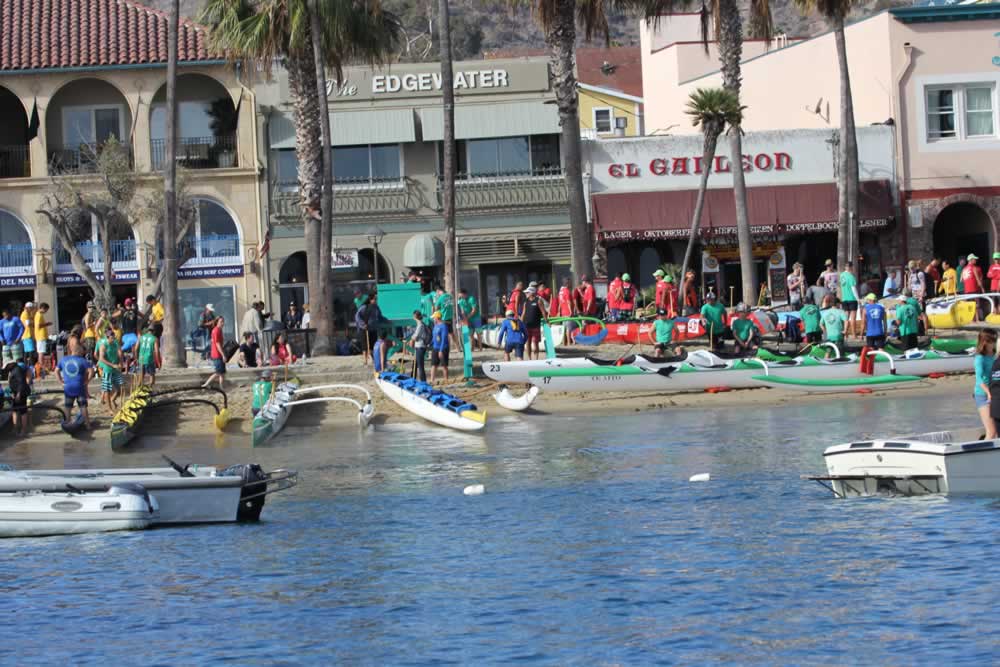 Billy once again took the tiger by the tail and held the canoes at bay until 10am on Sunday, then all hell broke loose. Paddles, 366 of them, dug deep as a roar from the men arose amongst the spray and churning water.

Conditions were a lot easier for the men’s race. There was a jumble of swells that were headed in the general direction of Newport Beach. Also headed in that direction was a massive grain-hauling tanker that approached from the South. The race course crosses a major shipping lane, and after some tense minutes of Billy warning escort boats to ‘give way’ and ‘make wise choices’, the tanker suddenly made a u-turn and headed in the opposite direction until the racers had cleared the shipping lane.

Just out of Newport, a pod of whales made their way north as the first canoes arrived. At the entrance to the Newport Channel, seals looked for free meals ignoring all of the boat traffic around them. No changes were allowed after the canoes entered the channel, so the last combination of six-paddlers had to spend some extra time in the canoe as they made their way back up to the Dunes. 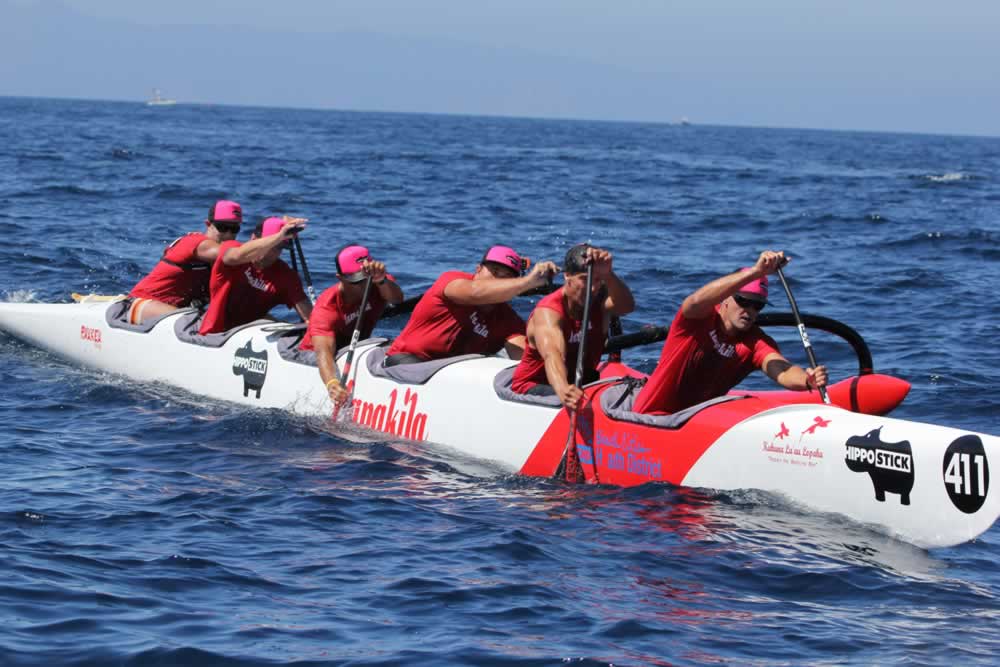 The winners, Paddling Connection of Tahiti, took the lead from the start and lead all the way to the finish in 3:36:42. Close on their heels was Red Bull/Na Koa Kona from Hawaii in 3:37:48. Another Tahitian crew, Moua Tamaiti No Papara, took third with their time of 3:42:38.

The party was already ‘happening’ when the last crew, Team Arizona OCC, made it to the finish in their time of 5:22:07, but the awards didn’t start until all of the canoes were stowed and everyone had a chance to join the party.

The awards ceremony was an event in itself. SCORA and co-host Offshore Canoe Club put together a top-notch event located on a sandy lagoon at the Newport Dunes Waterfront Resort and Marina. Racers were given a great meal and all the Kona Brew they wanted. There was also music and an assortment of vendors peddling the latest and greatest of paddling accessories. For links to more on the race, it’s history and 2016 winners, venture to: www.catalinacrossing.org. 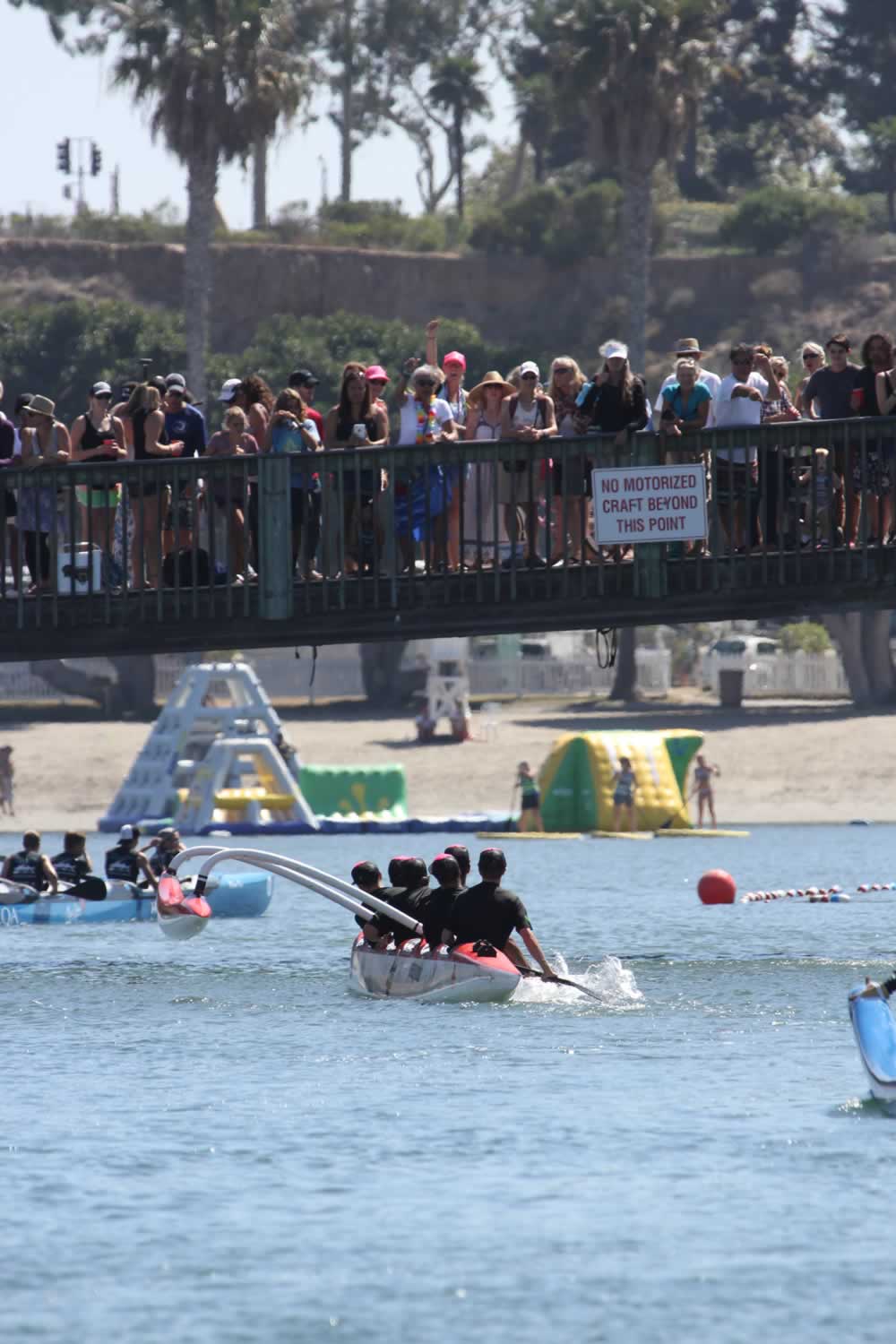 Mahalo for aloha Riding open ocean swells on a human powered, 40-foot long canoe with five of your friends is arguably the greatest ‘feeling’ one can experience in outrigger canoe paddling. On the windy island of Molokai, the paddlers of Wa’akapaemua thrive on this ‘feeling’.

When the opportunity to become the first Molokai team to compete in the Catalina Challenge presented itself, the boys of the ‘Friendly Isle’ teamed up with a couple of Maui boys to experience the California paddling scene. For one wide-eyed paddler, Conrad Martin — who’s never left Hawaii in all his 29 years, the scenery was a sensory overload.

On the relatively calm 30 mile race between Catalina to Newport, the  ‘feeling’ of gliding on a swell was far and few between for our crew.  Inexperience along with a broken t-top, missed water changes, and not knowing how long the last leg from the entrance of Newport Harbor to the finish was — or where the finish was, all contributed to a downward spiral that ended in 10th place overall, 8th in the unlimited division. Despite experiencing what can only be described as ‘culture shock,’ the trip proved to be a necessary learning tool.

One week later at the 10th Annual Pailolo Challenge, the slightly-more-mature Wa’akapaemua crew defended their home turf successfully, finishing 2nd overall, behind Team Primo’s 9-man crew, and 1st in the iron unlimited division. The conditions along the 26-mile course between Maui and Molokai were well above average and there were no shortages of crews recalling catching the longest rides of their lives. The friends, acquaintances, and bonds made at these races are all because of the good ‘feelings’ that come with canoe paddling. Let the tradition continue…

In closing, the paddler’s of Wa’akapaemua, Troy Heen, Brandon Kansana, Lohiao Paoa, Conrad Martin, Kingi Gilbert, Kaimi Kealoha, Kaeo Abbey and Ekolu Kalama, would like to thank Alex and Diane Gonzales for their hospitality and gracious hearts and for making our time in California a memorable one. We look forward to improving upon our finish next year at the Catalina Channel Crossing, bumps or no bumps!