There have been numerous articles written about the history of the Catalina Crossing, the second oldest outrigger canoe race still in existence, but not too many on the famous Grand Marshals that lead the race over the years.

When Albert “Toots” Minvielle founded the race in 1959 he thought to make a statement about Hawaii, its culture, and its locals love of ocean activities.

What a better way to do it than with a Hawaiian canoe race? Using Hawaii’s recent statehood as a marketing tool, he requested his mentor and already famous friend, Duke Kahanamoku, to become the very first Grand Marshall of the race.  Kahanamoku, with his six Olympic swimming medals and surfing prowess that made him world renowned was the perfect choice to lead the first ever Catalina Crossing. 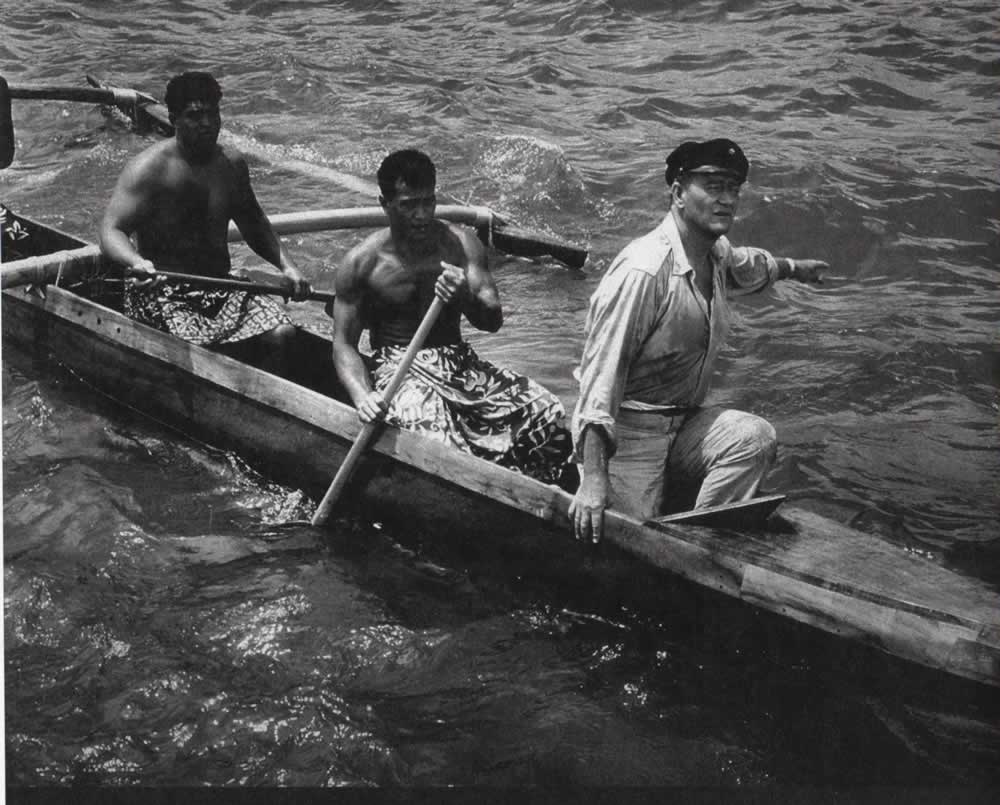 Another notable Grand Marshal, and perhaps the most surprising was Kahanamoku’s buddy – John “The Duke” Wayne. In 1971, “The Duke” used his famously converted 136-foot Navy minesweeper named “Wild Goose” as the lead vessel for the race. Wayne was no novice to hanging out in Avalon along with other celebs from the area. Many stories of those exploits are chronicled in the town’s colorful history. Duke and “The Duke” had been in movies together, shared the love of the Orange County Coast and a love for ocean activities.

In 1972, actor/comedian/musician Dick Smothers took the helm as Grand Marshal. Dick and his brother Tom were famous for hosting “The Smothers Brothers Comedy Hour”, a variety show popular in the late 1960’s. Smother’s vessel was also used as the Commodore vessel that carried extra spectators to Avalon.

Other notable Grand Marshals came about when John Rader, co-founder of Offshore Canoe Club, became the Catalina Race promoter. In 1982, Rader brought on Betty Cooke, the first ever female high performance offshore powerboat racer. On top of being a world champion and highly decorated powerboat racer, Cooke was a boat designer and builder and a Grandmother to boot! Cooke also opened up her shop and builders to develop a 45-foot long water line canoe for all of the association clubs.

Not one to rest on his laurels, Rader selected “The Beverly Hillbillies” and “Breakfast at Tiffany’s” actor Buddy Ebsen as the 1983 Grand Marshal. Ebsen’s decades long movie and TV careers is well documented, but not too many know he was an avid sailor and boat builder. His 36-foot foam sandwich catamaran “Polynesian Concept” was one of the first boats to use the sandwiching effect to create lightweight yet strong vessels.

The list of famous Grand Marshals goes on from beer company owners, yachting notables, local business moguls to governmental leaders. All of their accolades were their calling cards and Rader had a loaded deck. His expertise as director and race promoter built upon “Toots” Minvielle’s dream of this sport’s expansion throughout the world.