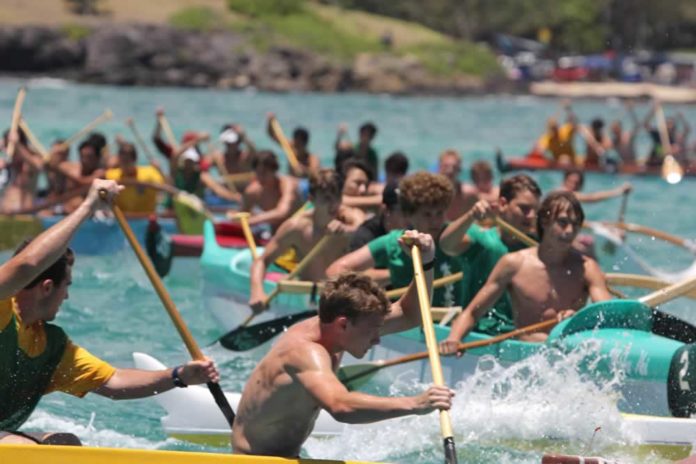 Over 102 crews of young paddlers raced in Kailua Bay. Conditions were perfect

There are seven age group brackets from 10 and under to 18 and under. Approximately 600 young paddlers took part in the event that was hosted by Lanikai Canoe Club.

The course was set within Kailua Bay. There were six heats. The youngest division, 10-and-under, raced a 1/4-mile from Popoia (‘Flat Island’) to Kailua Beach. The other age groups 12s, 13s, 14s, 15s, 16s and 18s had a longer course. Their race started and finished in front of the beach and included a ‘leg’ around ‘Flat Island’.

All the day’s results are posted at https://drive.google.com/file/d/0B4uGGXRIxYVLRkdEMTZuTE1Mdk0/view. Race photos are up on our Pacific Paddler Facebook page.

Tay Perry stands in front of the race banner dedicated to his father, George Perry. George was a kahuna kālai wa’a (master canoe carver) and founder of Lanikai Canoe Club in 1953. Tay and his father built Lanikai’s first racing canoe, Ka Ehukai, from a koa log. Since then Tay has built four more koa canoes from scratch and restored 16. Tay is an active paddler at Lanikai Canoe Club taking part in many of the races throughout the year. Tay is still restoring koa canoes at his workshop down in the industrial quarters of Sand Island, a stones throw away from Keehi Lagoon where many of the canoes he has brought to life have raced.