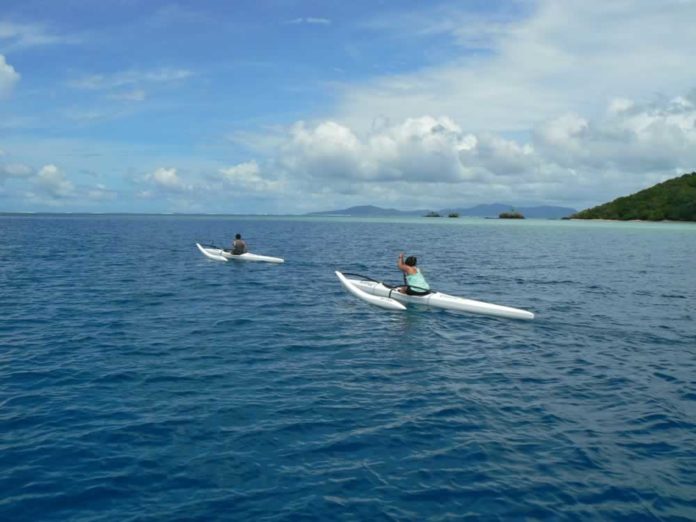 Congratulations to Rachel Belino and Nikki Pruksakasemsuk of Boston, MA USA on being the first to paddle OC1’s around the entire coastline of Ono Island, Kadavu, Fiji!

They endured all types of weather conditions with nothing but smiles on their faces!

While this may sound like a simple and meaningless accomplishment, it is a very difficult task as it requires perfect timing of tides, winds and paddling times since several of the bays cannot be easily paddled into, and back out again due to winds & tides. Rachel and Nikki did not set out to accomplish this unique and exciting paddle on their 14 day tour with Astrolabe Reef Outrigger Adventures, www.paddlefiji.com, but everything came together to make it happen. It is not to be taken lightly! The coastline of Ono Island is rugged, windswept, and wonderfully exciting. Its coastline consists of many bays, beach coves, rocky points, lively fringe reefs & steep cliffs.

It started innocently with a paddle in brisk winds and good seas off of Nabouwalu Village on the west coast of Ono Is. necessitating in a quick downwind paddle to the SE toward Ono Island. Rachel and Nikki met the coastline at the sheer rocky cliffs of Nairoba Pt. on the southwestern side of the island. A mesmerizing coastal paddle continued for another 5 km past Vabea village and along the shallow and crystal clear coral lined waters of Waisomo Bay. A scenic run past the cliffs around the Kenia peninsula with its long beautiful white sand beach brought them to the southern most point of the island. By now the winds had completely disappeared with the ocean turning to glass. After a hearty lunch, the paddle continued north along the eastern coastline past Narikosa Head north along the coast to the mangrove lined Natusara bay where a 10 kt. headwind was encountered and we called it a day after completing a total of approximately 22 KM. 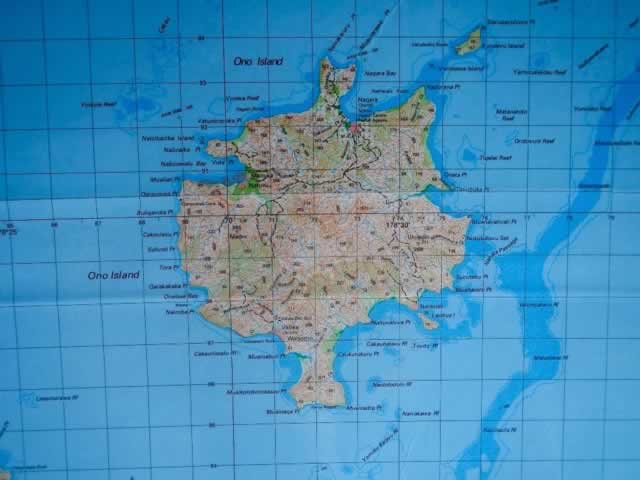 Under rainy skies and no winds, the ocean was surreal and silver in appearance as they paddled back south past Oneta resort and into Natusara Bay through surreal mangrove studded waters and up the river to visit the waterfalls. Weather conditions altered the coastal paddling for the day and they took a break from coastal paddling to have some fun in a great NW swell riding the waves out to the Great Astrolabe Reef.

The next day, brisk winds from the SE provided a great opportunity to paddle from the Great Astrolabe Reef back toward Kenia Beach and then retracing their earlier paddle back up along the south coast past the scenic cliffs at Nairoba Pt. Now paddling coastline not previously paddled, they were treated to spectacular geologically fascinating rocky coastline to the Bay of Caves, consisting of a small inlet of 6 small caves and waterfalls and a cave large enough to paddle an OC-1 into.

Completing a coastal paddle around Ono was not on our minds as they launched the next day with no winds from Oneta resort just south of Koromakawa. This meant a relaxing tranquil paddle to the north into beautiful tree lined Ngara Bay and out again before paddling SW along the long pristine beach lined NW coast. Paddling over extensive colorful coral fringe reefs, they entered the narrow and majestic Nabouwalu Bay with its shallow coral reef meeting the tropically forested mountains on both sides.
This is where the reality of a complete coastline paddle was possible because as true with Ngara Bay, it is highly unusual to paddle into, and then out again of Nabouwalu Bay due to high winds created by their geology. Now all that was needed to cover the entire coastline was a short paddle back over to the Bay of Caves. As it was well past lunch time, I announced to the gals what they were about to achieve and if they kept paddling for another kilometer or so they would be the first to achieve this awesome paddle. With no further thought to hunger, Rachel and Nikki made quick waste to the distance to the caves. Lunch suffered the same fate.