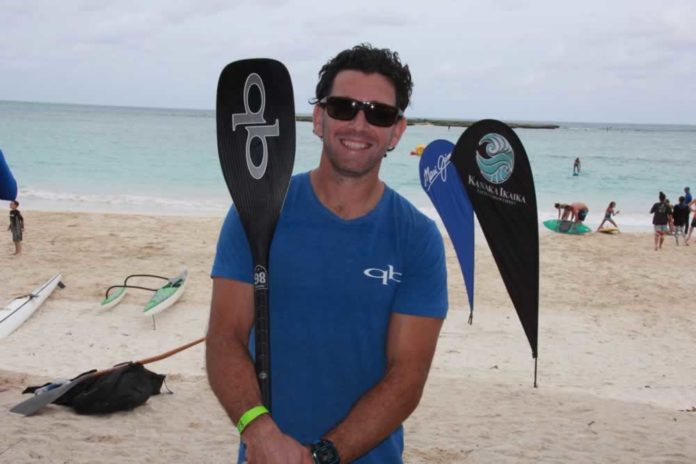 SUP is going mainstream. It has a lot to offer. It’s an amazing full-body workout and nearly anyone can do it.

You just have to find the right board for your body type and skill. Stand Up Paddleboarding (SUP) has to be one of the fastest growing sports in the world.

Where there’s water, there’s a SUP. Like the sport of outrigger canoe paddling, a SUP paddler can be any age, gender, or athletic prowess. For most jumping on a SUP is an easy way to ply the oceans, lakes or rivers while you get a work out—cruising at your own pace, exploring and enjoying nature. Then there’s the competitive paddler, the racer; Athletes who set out to win. Paddlers on the look out for any angle, any edge or advantage that will help propel them to the front of the pack. 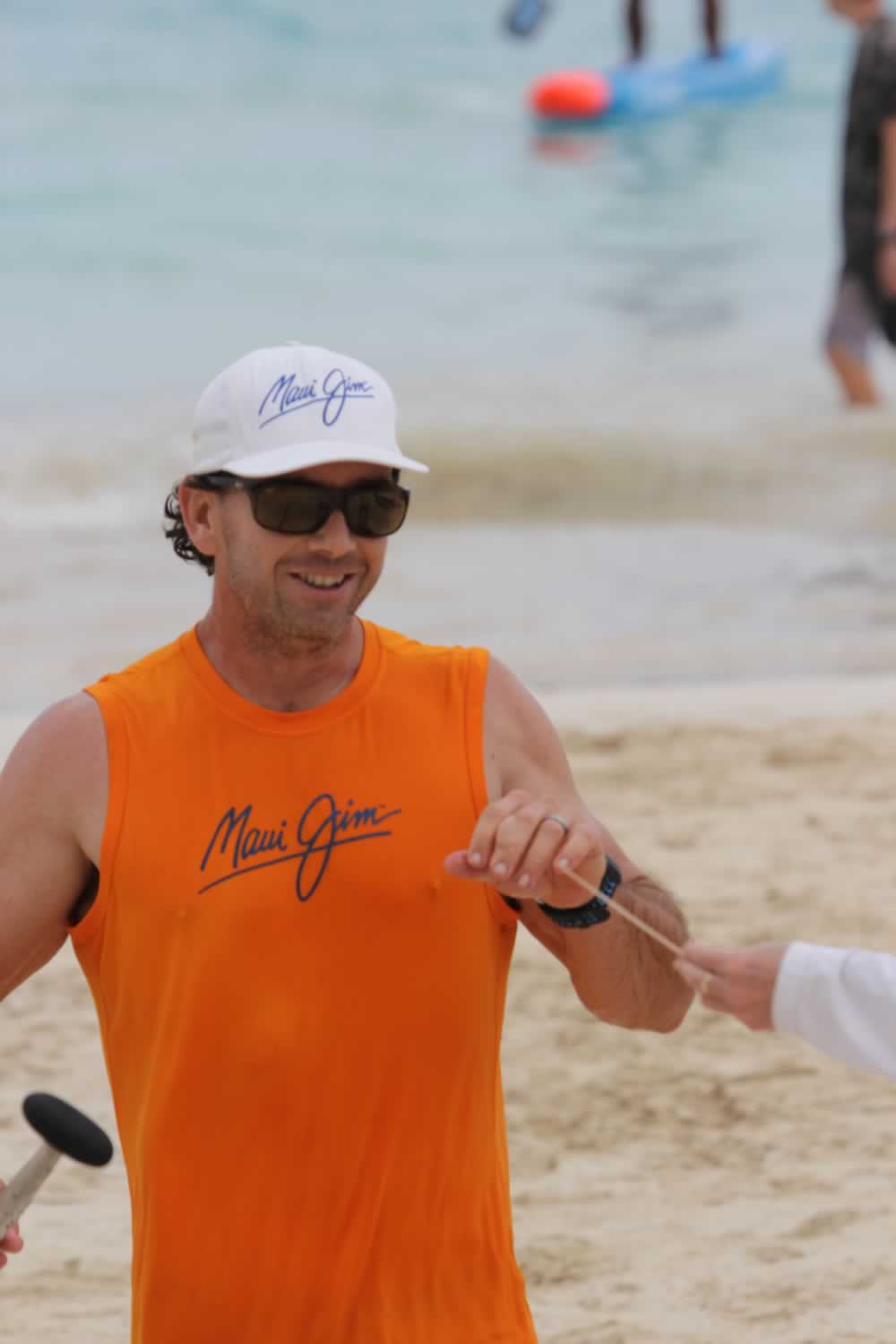 We talked one day after a Kanaka Ikaika race, and Travis gave us some pointers on what it takes to be competitive in SUP. First, I wanted to know where it started for him.

“I first tried SUP in Australia on an old windsurfing board. Then I saw it for the first time while in Hawaii during a outrigger event… I think it was 2009,” he said. “Jamie Mitchell was the first guy in Australia to be seen stand up paddling.”

Then in 2010 Travis entered the ‘Battle of the Paddle’ in Hawaii. He placed second behind Danny Ching who had also just started the sport. 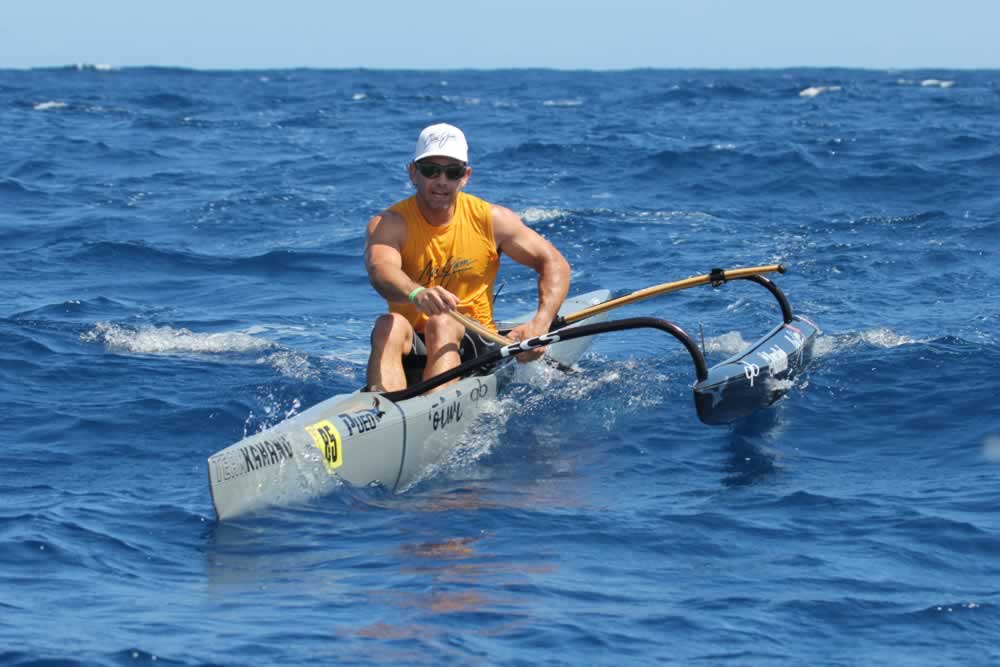 “I was not sure what this sport was about at the time as America kind of took control of it. Lucky for me, I happened to be good at it.” So to place second in Hawaii behind Ching in what was advertised as ‘a major SUP event’ Travis was pretty happy with himself.
“I thought maybe I should take this sport up,” he laughs, “and I did.”

SUP boards have come a long way. I asked Travis how he picks his.

“Me personally, I like a round bottom. Canoe hulls and surf skis are round, and I like that shape because it’s flowing. Other people like flat bottom boats for sprints. The flat boards are more stable, it feels easier, but a rounder board is faster and more efficient. It just takes a little longer to master it.”

Travis said he likes the tippy shape which he calls a displacement hull rather than a planing hull. “SUP paddlers don’t go fast enough to plane,” he said.

“We’re still in the experimental design stage. Surf skies and one-mans are becoming similar, but are different in width for stability. Stand-ups are slowly getting that way.”

Travis is a team rider for NSP, New Surf Project. Many features in the design of their boards is from his feedback. He wanted a round bottom SUP that flows in the ocean which was also good in long distance races. But not everyone can stay on his tippy boat, so there is a wide range of SUPs available.

“We have three categories, a 12’6”, 14’, and unlimited. It’s silly, it should be two; stock and unlimited. There are also three entry levels: novice, intermediate and ‘pro’. Choosing a board depends on skill level and body size.” Travis said with an OC1, everybody can get in it and paddle, but not all SUP boards are as accommodating.

“With the SUP business, there are too many variations of boards. Mine is 23-24” wide. An intermediate level board would be 24-26” wide and for beginners, 27-28”. We need all of those lengths and widths, so you can imagine the catalog for boards.”

Travis recommends a test drive if you can. “It’s hard to order a board without trying it out, and shops don’t stock all of them, so you have to find demo days and try some boards out.”
“Every manufacturer has a pro, an intermediate, and a beginners board. So obviously I ride a pro board because no one else can,” he laughs. ”You can work your way up to the tippier boards.” 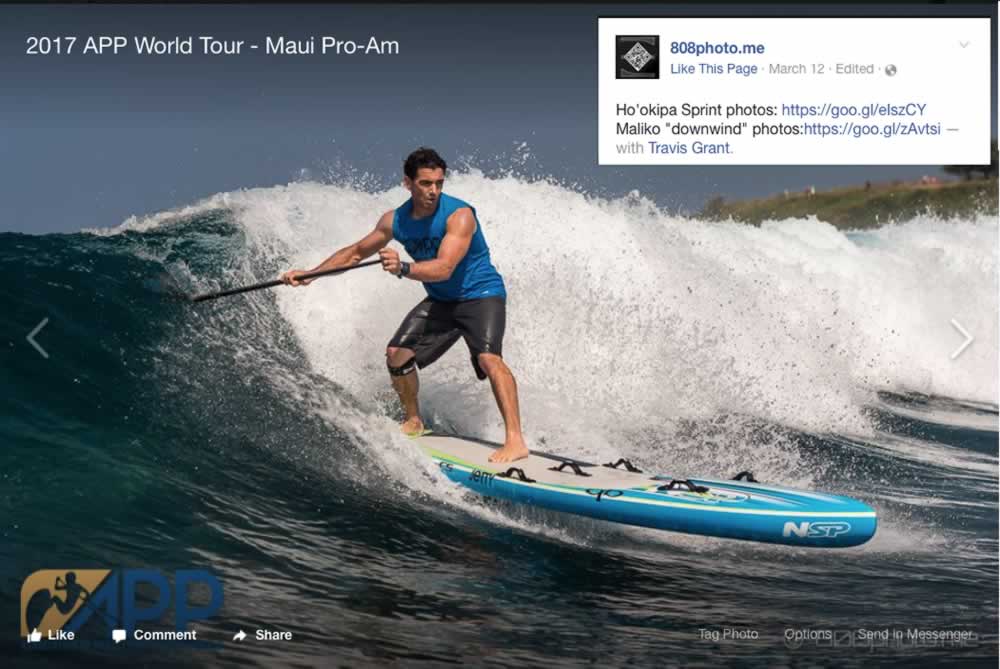 “My board’s bottom is convex, the deck is a dugout and has adapted some of the same theory of surf skies.”

In the old style surf ski, the seat was on top. The new surf ski seat is deeper in the hull, so Travis decided to try the same theory.

“A lower center of gravity means better stability and takes some time getting used to,” he said. His SUP has rails on its sides that helps to give his board buoyancy.

“The rails create ‘reserve volume’ so the water will lift the board as opposed to getting swamped. It is a bit of an arms race with he board companies,” he said referring to new innovations in SUP equipment.

“We are nearly maxing our limit to what a 14’ board can do. I think people are going to go ‘unlimited’ because there is more experimenting and design happening there.” Travis thinks that soon the one-man, the surf ski, and the SUP will all be very similar in hull design, and it will all come down to the paddler.

I asked Travis what kind of board he uses for a Ka’iwi Channel race.

“This race is for unlimited SUP, no restrictions for the moment, except it has to look like a surfboard,” he said. “I have 17’10” round bottom board. It’s tippy and it’s heavy because it’s filled with foam. There’s not enough money to make them hollow like canoes. So it’s heavy and feels slows when you paddle it, but once you get on a bump—it carries the speed well. If you have conditions where the bumps are closer together, you might need a shorter board or you have to run more angles. In the Ka’iwi Channel, with the wind direction and angle of the swell, you’re usually quartering across the waves to Oahu. You need a board that will carry well, but it also needs to be able to catch the bumps easily. The unlimited can include a rudder which you use to guide yourself onto the bump, and once you’re on the bump, it’s all surfing skills. It takes a lot of skill to master a SUP with a rudder, but you don’t have to have one,” Travis said. “But it makes it so much easier.”

Travis took part in some research on balance. Pro surfers and stand-up paddlers were asked to close their eyes and stand on one leg. The theory was that surfers would naturally have good balance, but that was proven wrong. The results suggested that both surfers’ and SUP paddlers’ balance comes from their vision. Travis explained it like this, “We’re always looking and adjusting where to go, what to do. When you close your eyes, you have bad balance. Keep your eyes open. You can work on your balance, it’s a visual skill for surfers and paddlers alike.”

I asked Travis what he requires of a paddle.

“My old coach used to tell me, ’Travis buy a good paddle and a good craft and learn how to make it work for you.’ That’s the best advice I ever got, otherwise you’re always looking to blame your equipment. A good tradesman never blames his tools.”

Travis said that normally the thickness of the board will determine the length of the paddle. “The main thing with a paddle is the shape,” he said. “You need a smaller blade, otherwise it’s too heavy to pull through the water.” He went on to add that there is such a thing as too much flex.

“It’s all in the shaft, not the blade. That’s where the magic is—with it’s flex and it’s strength.“ Travis noted that most shafts are round because they’re easier to make than oval ones.
“I like the oval shape because that’s what we use in outrigger paddling and because it’s stronger. I don’t like holding a round shaft, so I asked Quickblade to change it and they did.”
“I’m one of those non-teckie guys. I use a watch and a heart rate strap for training, but I don’t listen to music and I don’t drink coffee. I don’t want to get used to it. I like to be out there in the moment, thinking about what I am doing, using my senses—that’s just me.”
“I love races where no one knows the course. You have to think on your feet. A lot of people forget to think when they paddle, just heads down, hammer, hammer… Someone goes the wrong way and everyone follows.”

Travis uses his training time to plan and think out his race strategies because when he’s racing 100 percent there’s no time to work something out.

“I like the long distance races, which are more of a mental race in an ocean that is alive and moving. I don’t like sprint racing.”

Travis told me that the hardest race physically and mentally, hands down, is the Molokai race. His advice? “Don’t over think it. A lot of people will train hours, 5-hours at a time, but if you ask me, that’s not how you prepare. If you train for 5-hours straight it will make you paddle slow. You’ll finish the race, but you will come in last. We’ve all got to learn to paddle fast and learn how to manage our energy, up and down, through the race. Don’t go slow, you have to paddle fast, but make the distance. Easier said than done,” he said.

What do you notice that’s different about an OC1 race and a SUP race? “SUP is a very different sport. The rougher it is, the more that’s going on, you forget to enjoy the moment, where as in a canoe, you’re sitting down and you can enjoy the moment.”

Since his first race in Hawaii, Travis has won a (Hawaii) Battle of the Paddle, some big races in Australia, New Zealand and Europe, placed second in the Maui to Molokai and the OluKai races, won the M2O (Molokai 2 Oahu) twice, the Carolina Cup and Hood river SUP race. “Since 2010, I have pretty much taken the podium in every SUP race I have entered, but I might start to take a step back and teach what I have learned and focus on being a good father. I will also still continue to compete and race as I love just racing for fun and love the results and how I feel afterwards. It’s simply a bonus and surprise. The older you get, the more experience, the more you appreciate the moment.”

Travis and his wife, Blair, with eyes wide open have one more experience to balance and enjoy. They just became parents to a boy who they named Hugo. Perhaps that dugout spot on dad’s SUP will be a good place to hang out and imagine some new moves for the next generation of watermen.